Bear Market Rallies: Here's a Key Insight
How investors get snookered into the belief of "a further market advance"

Nothing raises the hopes of the bullishly inclined like a rapid bear market rally. And there's been several since the early January top in the Dow Industrials and S&P 500 index.

You may be interested in a key characteristic of most of these rallies. 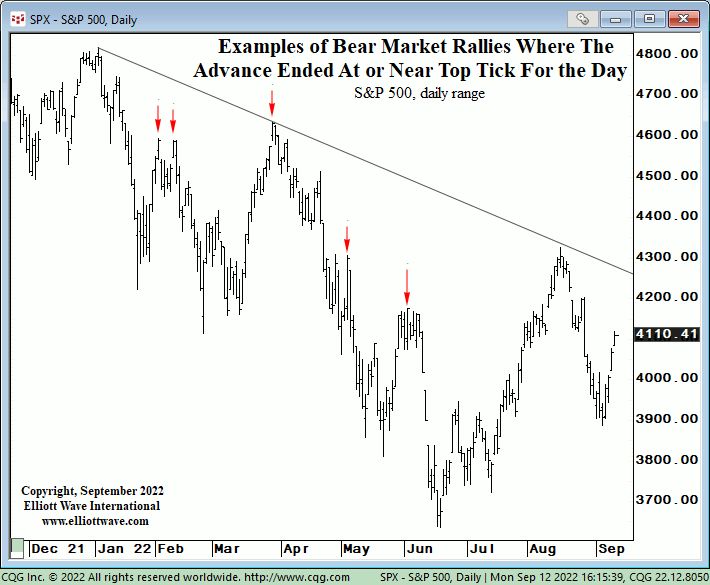 Sometimes the upward push will end at or near top tick of the daily range. A quick glance at the countertrend rallies since the January peak in the S&P shows at least five instances of this happening, indicated by the red arrows on the chart. The final trade of these daily ranges was at or very near the high of the day, creating belief in a further market advance when in fact it was the top of the rally.

That said, here are just a couple of examples in recent months of the lingering optimism:

In other words, memories of the prior bull market die hard, even several months after the S&P 500's record high near the start of the year.

And, regarding those July and August headlines about a market bottom, that didn't turn out to be the case. Here's a Sept. 16 headline (CNBC):

The question is: Will other indexes -- like the S&P 500 and Dow Industrials -- also plunge to new lows?

Now is the time to familiarize yourself with the U.S. stock market's Elliott wave pattern.

If you're new to Elliott wave analysis or need a refresher, do know that the definitive text on the topic is Frost & Prechter's book, Elliott Wave Principle: Key to Market Behavior. Here's a quote from this Wall Street classic:

Without Elliott, there appear to be an infinite number of possibilities for market action. What the Wave Principle provides is a means of first limiting the possibilities and then ordering the relative probabilities of possible future market paths. Elliott's highly specific rules reduce the number of valid alternatives to a minimum. Among those, the best interpretation, sometimes called the "preferred count," is the one that satisfies the largest number of guidelines.

If you'd like to read the entire online version of Elliott Wave Principle: Key to Market Behavior, you may do so for free after you join Club EWI, the world's largest Elliott wave educational community (about 500,000 worldwide members and growing rapidly).

A Club EWI membership is free and allows you free access to a wealth of Elliott wave resources on financial markets, investing and trading without any obligation. Those resources include exclusive videos and articles from Elliott Wave International's analysts.

Just follow the link, and you'll be on your way to becoming a Club EWI member: Elliott Wave Principle: Key to Market Behavior -- get instant and free access now.

This article was syndicated by Elliott Wave International and was originally published under the headline Bear Market Rallies: Here's a Key Insight. EWI is the world's largest market forecasting firm. Its staff of full-time analysts led by Chartered Market Technician Robert Prechter provides 24-hour-a-day market analysis to institutional and private investors around the world.